The Forsaken are moving through the warrens of Drowington swiftly and with purpose. They have been betrayed, and that betrayal will be paid for tonight. Elise Zadaria and all who stand with her will pay for their treachery. Thorn himself has sanctioned this mission, and Baron Vandermir has granted permission to act in his city. The Forsaken must not fail. If they do, they will die.

As the Forsaken move through the sleeping city of Everett, the air becomes cold. Winter has begun to settle upon this part of Arre. The citizens of the city are nestled deep into their beds, their stoves stoked against the onslaught of deep Winter. As the Forsaken move towards their target, the clouds of their breath reveal the temperature to be dropping as fast as they are moving.

The dim light from the waxing new moon is soon covered as a dense pack of heavy clouds blows in from the northeast. The clouds are brought in by an icy wind that threatens to freeze the Forsaken to the marrow of their bones. But still they move closer and closer to their grim purpose.

As their destination draws near, the sky becomes thick with snow. Flakes the size of coins quickly grow to the size of small plates. Even though their vision becomes obscured, their feet know the path. It is only when the cold air begins to burn their lungs that the Forsaken start to slow their pace.

The snow gives way to sleet, and then ice begins to fall from the sky and coat the city in a hardened shell. The travel is difficult, but still the Forsaken manage to move closer to their destination. The wind strengthens to a gale, and every exposed patch of flesh on their bodies is slashed open by the razor sharp ice. Their blood mixes with the ice, and freezes over their wounds

As they reach the square across from their destination, a hole opens in the clouds allowing the Forsaken a clear vision of a monstrous aberration that obviously has no place amongst the sane. The creature stands hundreds of feet tall, its long arms ending in taloned claws each much longer than a man is tall. Its grey and mottled skin fits tight to its twisted and barely humanoid skeleton. Perhaps most disturbing is its head, with its over large mouth filled with fangs and its deep eye sockets in which are set not eyes as may be recognized as such, but rough spheres of ice that glow with a malevolence and hatred for all things warm. 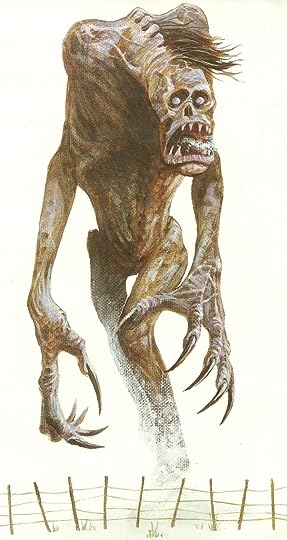 The creature looks down upon the Forsaken and lets forth a great howl. The gale winds felt before seem a warm and comforting as a gentle summer breeze in comparison to the harsh and bitter cold that issues from the creatures fanged maw. When this fell wind reaches the Forsaken, they begin to feel the iced blood on their wounds begin to reach deep into their veins. The capillaries near the surface of their skin begin to burst as the frozen blood tears through them.

“My Children,” says a motherly voice, “look upon this being and know that it and it’s kind cannot be reasoned with. These creatures exist only to sow chaos and insanity throughout all of reality. Those that serve these abominations seek a purposeless destruction of all things that are not their mindless masters. They will stop at nothing to bring their masters to this world from the depths of space and time.

“The one you know as Elise Zadaria serves this creature, and she has actively worked to defeat you. She wishes to pervert the ritual that you have been performing to allow this creature to come to Arre instead of Vetra-Kali. She must not succeed.

“Feel the ice in your veins! Know that is the fate of all on Arre that would be Mine should you fail! You shall defeat the White Raven, and ensure this mindless thing that you see before you does not come through the Veil!”

As the voice speaks, each of the Forsaken feels their heart begin to burn within their near frozen body. The slushy ice blood in their veins begins to warm.

“You have only seen the Bloodfire to come. Now let it course through your veins so that you may understand it!”

With these words, the hearts of the Forsaken burst into flames. Their blood is as lava in their veins. The Bloodfire can neither be contained by flesh, clothing, or armor, nor does it consume those things. It bursts from their bodies, and instead of pain there is only ecstasy.

“Now My Children! Strike at those who would betray Me! To them show no mercy! Show all who would seek to bring these abominations to this plane that they will never succeed!”

The Bloodfire in each of the Forsaken merge into a mighty conflagration that attracts the attention of the fearsome giant towering above. It looks at them and unleashes another blast of ice and snow from its freezing maw, more powerful and somehow even colder than the one before. The Bloodfire is not diminished. The thing reaches down with its claws and the Bloodfire flares up towards it. The creature recoils in obvious pain. It looks down on the Forsaken, and lets forth a howl that sounds like a thousand ice storms falling on a city of glass.

“Release My Bloodfire on all who would stand against you!”

The Bloodfire explodes from the Forsaken and begins to consume first the city of Everett, and then the strange giant creature towering above it. It does not stop there. It continues in the form of a wave, hundreds of feet tall, that quickly spreads over all of the lands and seas, consuming everything it its path. Soon enough the Forsaken are surrounded by nothing but ash.

The Bloodfire begins to recede, and with that the night returns and Everett is as it was. “Now My Children. Do not fail Me.”

The Forsaken have just arrived across the square from the inn that you know Elise and the rest of the White Ravens have been holed up in. The night is calm with just a little nip in the air. The streets are very quiet. Except for a couple of guards in front of the Abbey of St. Celeste, the square is deserted.
—————-

The following boons are granted for the encounter with the Ravens:

Bless for the whole party that begins at the top of the 1st round of initiative and ends when combat is over. Can’t be dispelled during combat.

Each of the Forsaken gains the effect of a Guidance spell for one single use, for whatever they want to use it on.